Coenzyme Q10, also known as Ubiquinone, is a vitamin like substance which plays a vital role in the body’s energy supply mechanism, acting in conjunction with enzymes to convert sugars and fat into energy, hence the name co-enzyme Q10 or short CoQ10.

Coenzyme Q10 is present in every cell of the body. CoQ10 is ubiquitous in the mitochondria of every cell, but becomes depleted with age, illness, intense physical exercise and modern lifestyle. Therefore a coenzyme Q10 supplement is strongly recommended for diabetics, people with heart and circulation problems, and people suffering from low energy levels. 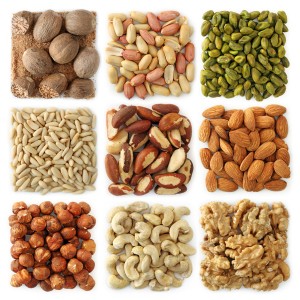 Nuts are a rich source of CoQ10

Coenzyme Q10 also has been shown to be very effective for people with Parkinson’s disease and particularly for patients who take cholesterol lowering statin drugs, which are known to deplete CoQ10 in your body.

There is a lot of debate about a newer form of coenzyme Q10 called Ubiquinol, which is supposed to be more effective than Ubiquinone. However there are a number of problems with the claim that Ubiquinol is superior. > Position Paper by Viridian Nutrition.