Turmeric (Curcuma longa L.) is a herb which has been used as a spice, or flavouring, in Asian countries for thousands of years. It forms part of the Zingiberaceae (ginger family) and the root and rhizome is crushed and powdered into ground tumeric which is commercially available.

Turmeric is an excellent anti-inflammatory. It helps to reduce joint pain and increases mobility. Turmeric also helps to increase circulation as well as proctect the liver.

If you combine Indian turmeric and ginger with nettle and artichoke, you will get a powerful herbal combination, which has dual action as both anti-inflammatory and a detoxifying complex for supple joints. 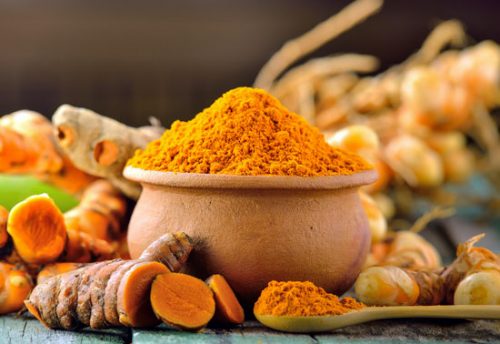 However, fresh turmeric leaves are also used as flavourings in some regions of Indonesia. Apart from its use as a spice during cooking (turmeric is largely responsible for the bright yellow colour of many Asian dishes) it is also thought, and many studies have confirmed, that turmeric has beneficial medicinal properties as well. This is largely thought to be due to its curcumin content which is around 3%.

It has been discovered that curcumin is the most biologically active compound in turmeric which has prompted numerous scientific studies as to its use in a medicinal context.

Turmeric is a widely researched herb, with the majority of the studies being conducted on its ability to prevent and treat stomach ulcers. In the past, stomach ulcers were thought to have been caused by a number of factors including stress and regular consumption of spicy foods.

It has now been discovered that stomach ulcers are caused by a bacterial infection. The bacterium responsible is called Helicobacter pylori and is unique in that it can live within the mucosal lining of the stomach and erode the protective barrier. Once this barrier is weakened, stomach acid can come into direct contact with the cells of the stomach wall and damage them, causing an ulcer.

Curcumin’s other main use as a supplement is its ability for controlling inflammation. It has been shown to be a potent anti-inflammatory agent and therefore may be used by those suffering from, or are prone to, inflammatory disorders such as arthritis. It may also provide a vegan alternative to other anti-inflammatory supplements including fish oils.